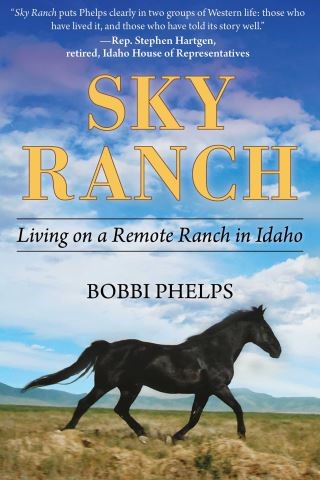 Living on a Remote Ranch in Idaho

A city girl is uprooted and moved to the farm, where she must overcome her fears and learn to live life in a rougher way.

Once Bobbi Phelps married an Idaho rancher, she discovered what it was like to live in rural America. The contrast between her suburban background and her farming life created challenging yet rewarding differences.

Sky Ranch tells of Bobbi Phelps’s Idaho ranch experiences between 1980 and 1996, the adventures in a past time before camera phones, GPS technology, and social media. Throughout this memoir, she shares frightening tales of:

Sky Ranch is a memoir about a naïve suburban woman who struggled to navigate an industrial farm and its commercial cattle enterprise. Her life on the ranch meant grocery shopping once every two weeks, driving through harsh winter storms and swollen streams, and rescuing her horse in a full-blown blizzard. Living in the Rocky Mountains allowed her to fish, hunt, and camp on a regular basis. She also discovered different aspects of the Mormon religion, coyotes hunting her dog, industrial farming, and environmental conservation.

Sky Ranch will appeal to readers interested in Western culture, cattle and row-crop farmers, hunters, anglers, and those who only dream of living on a ranch. It takes the reader on an exciting ride of terror, drama, and humor, giving us a look at what goes on behind the scenes at a rural ranch, many miles from civilization.

Bobbi Phelps: Bobbi Phelps is the author of five books, including Behind the Smile During the Glamour Years of Aviation. She was the president of the Authors Guild of Tennessee and is a columnist for The Connection. She resides in Loudon, Tennessee.