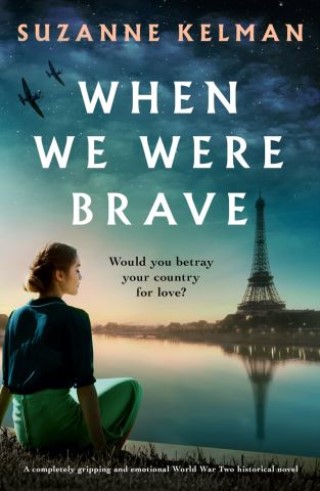 When We Were Brave

The face of the woman in the photograph was tilted upwards, as if enjoying the sunshine just for a moment, even as the wreckage of the bombed-out street lay behind her…

1944, Cornwall: Blinded by love, Vivienne Hamilton eloped to Paris with a Nazi prisoner-of-war, never to be seen again. A disgrace to her family, her name would not be mentioned by any of her relatives for over 75 years.

Present day, London: When Sophie discovers a photograph of her great aunt Vivi from World War Two, it throws her into a world of confusion. Because, as she learns about this secret relative, she quickly realises that the photograph doesn’t fit with her family’s story. It shows Vivi leaving an address associated with a spy network in London – a place she had no reason to be – and it is dated right before she disappeared.

Meanwhile Sophie’s own life feels as blasted and bombed as the blitzed city in the photograph she’s looking at. Her beautiful daughter – as full of joy and wild energy as Vivi had apparently once been – is gone; and Sophie’s heart has been left broken into pieces.

Retreating to the family home in rural Cornwall to seek solace from her pain and the feelings of guilt that she could have done more to protect her daughter, Sophie finds herself becoming obsessed with Vivi’s life.

But nothing can prepare Sophie for what she is about to uncover – the story of a woman who risked everything for the person she loved the most; and a secret family history that could be the key to Sophie’s own future.

A powerful, haunting and unforgettable read about love, heartbreak and betrayal set in Second World War Britain and France. Perfect for fans of The Nightingale, Under a Scarlet Sky and My Name is Eva.

Readers love When We Were Brave:

‘Wow! Just wow! This book kept me on the edge of my seat right from the get-go!... [An] amazing story.’ Goodreads Reviewer, 5 stars

‘Fantastic… Historical fiction at its best. Characters that you fall in love with, a story you will hate to end.’ NetGalley Reviewer

‘Totally captivating… About the bravery of the silent heroes of WWII, the secret agents who intercepted codes… A wonderful, compelling story that will grip you to the very end, it will break your heart but it will also leave you with a sense of gratitude for these selfless individuals. I can't stop thinking about this story.’ Krafti Reader, 5 stars

‘I [am] hooked on this FANTASTIC author. When We Were Brave is another OUTSTANDING piece of fantastic writing… I have nothing but total admiration.’ Goodreads Reviewer, 5 stars

‘Mesmerising and captivated me with every turn of the page… Absolutely heart-breaking… Filled with sadness, love, courage and sacrifice – I couldn’t put this book down.’ Stardust Book Reviews, 5 stars

‘A heartbreaking tale of war, love, loss, betrayal and courage…