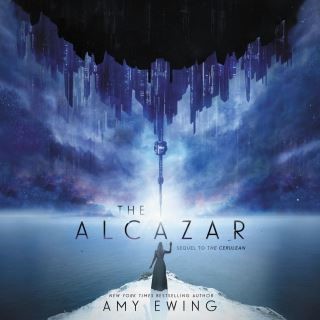 Sera has finally recognized the true power of her Cerulean blood. But in order to return home, she’ll need help from Agnes, Leo, and their grandmother—the only person with knowledge about the mysterious island of Braxos, where the Cerulean tether is anchored. Though the journey will be treacherous, Sera will risk anything to see her City again.

Meanwhile, the High Priestess’s power has reached new heights in the City Above the Sky. And when Leela begins having visions of Sera, alive, she knows she’s the key to saving the City. But to bring Sera home, Leela must channel the strength, courage, and curiosity that once got her friend exiled.

With the help of friends, family, and Cerulean magic, Leela and Sera could soon return to their normal lives. But when that time comes, will Leela be able to serve her City as blindly as she once did? And will Sera be able to leave everything and everyone she’s grown to love on the planet behind?

Amy Ewing earned her MFA in Writing for Children at the New School and received her BFA at New York University. The Jewel started off as a thesis project but became her debut novel, the first in a New York Times bestselling trilogy. The other books are The White Rose and The Black Key. She lives in New York City. Visit Amy online at www.amyewingbooks.com or on Twitter @AmyEwingBooks.